Event Report: Balkan Day. A Celebration of Creativity and Identity

Balkan Day: A Celebration of Creativity and Identity, a seminar organised by Istros Books, Wasafiri Literary Magazine, Kingston University and British Library in London was a real feast for both Balkan and book lovers.
The programme of the event was divided into two parts: morning and afternoon sessions. During the introduction, Dubravka Ugrešić, a famous novelist and essayist born in Croatia splendidly summarized the essence of the event, problems of Balkan creativity and identity: I am a traumatized literary personality; our mother tongues and national literatures are our homes; translation into foreign languages is a refugee shelter. I write in a language split into 3: Serbian, Croatian and Bosnian; translators keep me alive. It is a marriage. My admiration for translators is immense. I often feel invisible too, like translators. Only literature written in major languages enjoy borderless travel. Others travel on dubious passports.(1) Whereas Vladislav Bajac, a Serbian novelist and publisher, focused on the Balkan literary marketplace, which is, according to him, in danger of commercialism.
Dubravka Ugrešić also took part in a following panel discussion chaired by Christina Pribićević-Zorić, a literary translator. Together with other participants, journalists and novelists  Andrej Nikolaidis and Muharem Bazdulj, novelist and senior research fellow at Edinburgh University Igor Štiks, and associate professor at Literary and Cultural History of Modern Europe UvA Amsterdam Alex Drace-Francis, tried to solve the mystery of Balkans attractiveness and on the other hand, its negative perception in the UK media. Muharem Bazdulj was asked to sum up the positives about the Balkans, the land of honey (Tr. bal) and blood (Tr. kan). He mentioned, among others, Greek mythology and positive attitude to life. Referring to Russian critic, Mikhail Bakhtin, Bazdulj designated Balkans as a Carnival part of Europe.

The afternoon programme began with Milan Grba’s presentation, Balkan Culture in ten items from the British Library collections. The curator at the British Library presented scans of beautiful, old manuscripts from the region of Balkans, as well as other treasures, e.g.  Henry VIII’s notes on Marko Marulić’s Evangelistarium. Next speaker, Nebojša Radić from the University of Cambridge Language Centre, in an entertaining presentation, tried to answer the question ‘What are we talking about when we talk about the Balkans?’ According to him, the knowledge about the region consists of facts and myths. He illustrated his opinion with an article: How to write about the Balkans, published in Balkanist, which starts with an advice: Begin with some dramatic, vaguely dangerous-sounding scenery. For instance,”steep cliffs plunging directly into the sea”, “a vampiric maw of limestone peaks”, or “beauty infused by danger”.(2)
After a short break, Vesna Goldsworthy, a writer and professor at Kingston University, presented a special Balkan issue of Wasafiri Literary Magazine, which she was a Guest Editor of. The summer edition contains poetry, fiction, drama, several articles, interviews and art feature from the Balkans. Among the authors are David Albahari,  Milena Marković, Mileta Prodanović and many others, including the guests of the festival. One of them is Igor Štiks who introduced himself, this time as a poet, and read one of his poems A History of a Flood published in the magazine. The reading was followed by Mark Thopmson’s introduction to Danilo Kiš’s life and output. As his biographer (Birth Certificate. The Story of Danilo Kiš) prepared a special Alphabet for Danilo Kiš, published in the issue. Whereas Muharem Bazdulj presented one of his stories and mentioned his article on Young Bosnia, which was published in Wasafiri.
The guests had also a chance to see a short, moving fragment of Frozen Time, Liquid Memories, a film by Dragan Kujundžić, a professor of film and media studies, Jewish, Germanic, and Slavic Studies at the University of Florida.

In the panel called Balkanisation: the pick of recent Balkan fiction in English, Rosie Goldsmith, a BBC journalist introduced three writers from the region: Dubravka Ugrešić, Vladislav Bajac and Andrej Nikolaidis. All of them read fragments of their books recently published in UK, Europe in Sepia, Hamam Balkania and The Son. The readings were followed by a discussion on the writers’ (unidentified) identity, Yugoslav, post-Yugoslav, Serbian, Montenegrin, Croatian or Dutch. In the end, the guests of the event had a chance to watch a Bulgarian film, World is Big and Salvation Lurks around the Corner, based on the autobiographical novel by Ilija Trojanow.
The Balkan day was a day of outstanding literature, interesting discussions and finally a day of great enjoyment. Hopefully it was the first event of the annual Balkan celebration.
Written by Joanna Michta
Edited by Alicja Zajdel
Photos courtesy of Kinga Macalla
Quotations:

Book Review: The Xenophobe’s Guide to the Poles by Ewa Lipniacka

I have to admit that The Xenophobe’s Guide to the Poles is one of my favourite guides to Polish-ness. No matter how many times I have read certain passages, I still cannot stop laughing.
The little booklet consists of 86 pages divided into 19 chapters and was written by Ewa Lipniacka, a London University graduate, librarian and writer. In the chapter The Flexible Pole, we can read about old Polish recipes, e.g. how to make an almond cake: if you have no almonds use ground beans and almond flavouring. In another chapter, Eating & Drinking, Ewa Lipniacka explains what Poles have for their “second breakfast”, by saying that the “[s]econd breakfast” is whatever you can get away with at work: usually another coffee and a sandwich at your desk, and if your desk happens to be in the front office of a bank, you eat in full public view. For those who are studying Polish there is a chapter on the language as well, where we can learn that anyone who tells you that the Polish alphabet consists of ‘s’ and ‘z’ is exaggerating. Only half of it does. I could easily fill the whole page with quotations from The Xenophobe’s Guide, as the booklet is filled with anecdotes and witty observations, but I do not want to spoil the pleasure of discovering them in the context and having a good laugh.
The Xenophobe’s Guide is a real treat for Polish readers, but also for foreigners planning to visit Poland and willing to know a little bit more about the Polish mentality, beliefs and culture. The Xenophobe’s Guide points out the common stereotypes and generalisations about everything Poles do and are. If you are planning to read it, remember to take it with a pinch of salt.

When I first visited Cornwall, I immediately fell in love with its beauty and calmness. I thought that my first impressions were not going to last long and would disappear or become a norm, losing its purity and uniqueness. However, it did not happen. Cornwall surprised me for the second time and proved to be a truly breathtaking part of the British Islands.

So where did I go? It was a small town, Bude, in the north of Cornwall, where I spent a truly remarkable weekend in a tent surrounded by trees, grass and other campers. Arriving on a beautiful sunny Friday evening in July last year, I felt already relaxed just by observing nature in its glory. After having a very refreshing sleep, I woke up at 6am feeling ready to explore Bude. Driving to the town I had to stop to admire the astonishing views of the blue ocean and yellowish dry grass.

After arriving in the town, I had a little stroll around, I went to see the centre with its local shops and boutiques and then slowly followed the river up to the beach to be impressed by the amazing view of white foamy waves against the background of the navy blue water. I walked on the beach trying to wet my feet and overcome the extreme coldness of the morning ocean. As it was getting warmer, I noticed that many sunbathers found their way to cool down and they were swimming in the sea. I immediately decided to follow them and a minute later I was immersing myself in the pool of natural, salty water. The pool was surrounded by a tall rock formation on one side and by the ocean on the other. At low tide, the pool could be accessed from the beach, however at high tide, it was flooded with water, so swimming was necessary to get to the beach.

As the twilight was falling, many passionate crab-catchers appeared on the river bank. They were accompanied by their family and friends who eagerly supported them. The crab-catchers were only saving the bigger specimen. For the dinner plate?-one may wonder. From time to time, you could hear someone screaming ‘Jellyfish!’ as these beauties were also thrown into the river with the high tide.

It was so good to slow down and simply enjoy life for those two days. I remember the feeling of sadness on Sunday evening when we were leaving the weekend in Bude behind and heading back home. I guess tranquillity and happiness can be addictive. I will need another dose of them very soon!
Written by Kinga Macalla
Edited by Alicja Zajdel
Photos courtesy of Kinga Macalla
Comments: 0
CATEGORY:
Blog
July 7, 2014

Event Report: Syria Speaks. Art and Culture from the Frontline.

On 12th June the Festival of Ideas at Foyles Bookshop hosted remarkable Syrian writers, Khaled Khalifa and Robin Yassin- Kassab, and a video artist and cinematographer Khalil Younes. The event was a part of the UK tour Syria Speaks. Art and culture from the frontline, which marked the publication of a book with the same title, a unique anthology of uprising literature, art and culture.
The evening was filled with stories, both fictional and real, full of darkness and hope, fear and friendship, all related to the revolution. At first we could hear a fragment from the award-winning Syrian novelist, screenwriter and poet Khaled Khalifa’s book Lettuce in Fields read by himself in Arabic and afterwards by Robin Yassin-Kassab in English. After the reading, the writer told anecdotes about Syrian censorship and talked about gratitude and fears which accompany every morning coffee in his house in Damascus.
Similar feelings were also present in Khalil Younes’s speech. The audience of the festival could see some reproductions of his illustrations, such as Hamza Bakkour, which commemorates a thirteen year old boy’s tragedy. Khalil Younes is not only an illustrator, video artist and painter but also an author of short stories. One of which, Chicken Liver, included in anthology, tells a real story about him and his friend who found themselves on opposite sides of the conflict.
Likewise the above mentioned artists, Robin Yassin-Kassab presented a fragment of his yet unpublished book which was received with a warm applause. He shared his observations on Syria from the position of a writer and a journalist. According to him, every person in Syria has a terrible, unbelievable story to tell but not everyone has a chance to be heard. On the other hand, as he mentioned, media don’t always show the activities of people who bring hope and believe in humankind, such as the baker who stayed in Syria to bake bread for the local people or the man who publishes a children’s magazine for younger Syrians.
I truly believe that the UK tour Syria Speaks. Art and culture from the frontline gives an opportunity to Syrian people to express themselves beyond the media and for the British audience to hear an authentic voice of the Syrian revolution.
Written by Joanna Michta
Edited by Alicja Zajdel
Photo courtesy of Khalil Younes 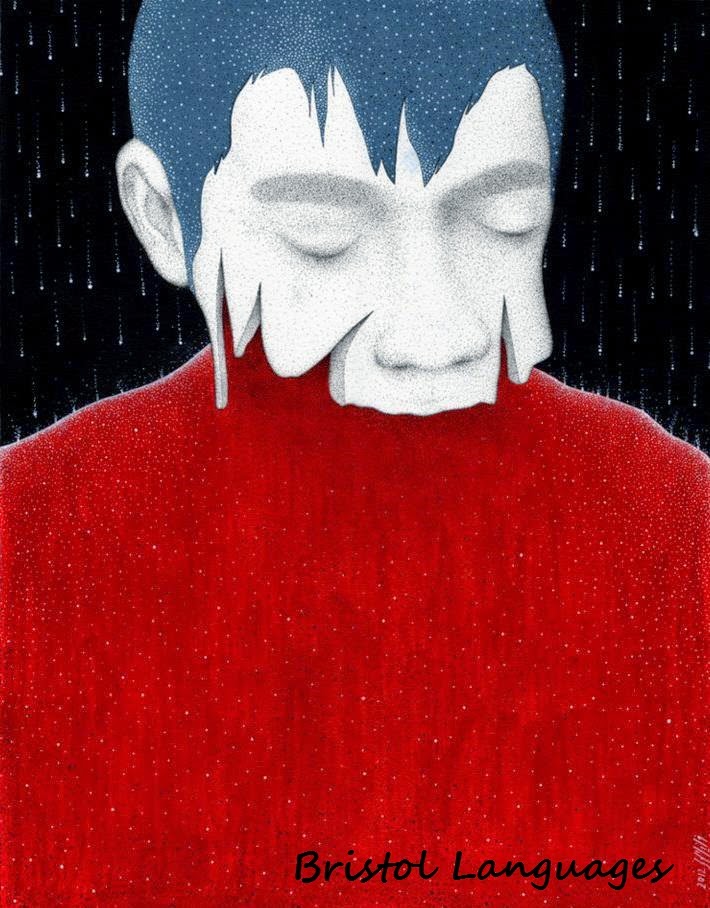