My adventure in Indonesia began in 2014 with a spontaneous visit to Sumatra. I remember, during one of my travels to New Zealand, flying over a lusciously green island and the pilots telling us that this was Sumatra. And since then, it has been in the back of my mind – this green, tropical, jungle covered island in the middle of the Indian Ocean. So, upon completing my University degree in October 2014 and fancying an adventure, I booked a ticket to Medan in North Sumatra on the spur of the moment. It has turned out to be an unforgettable experience which has influenced, and still keeps on influencing me, and which has led to even more adventures. 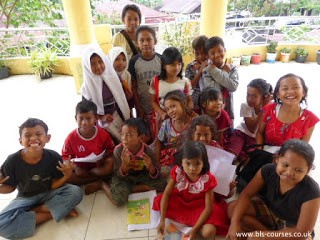 Sumatra is a tropical island, covered in jungle, and with a high humidity, the perfect place for diverse wildlife such as orangutans, rhinos, gibbons, Thomas’s langur monkeys, pythons, hornbill birds, honey bears, elephants and tigers (just to name a few) and breath-taking nature (giant leafy plants, huge trees, rivers and volcanoes). But what had the biggest impact on me, and led me to go back there as a voluntary English teacher, were the local children.

While visiting Bukit Lawang, a village bordering with the jungle, which was hit by the Tsunami in 2004, I went for a walk and met an English teacher in the village school, which has been funded by donations collected by a woman from Jersey after the catastrophe hit. It first helped people affected by the Tsunami as a medical centre, and then, when medical help was not urgently needed anymore, was converted into a school and kindergarten. This school had such an effect on me, that upon my return home, I signed up for a Master TEFL course, quit my job and spent the next months learning Indonesian and collecting contributions for the school, baking cakes, muffins and brownies for my colleagues. After 4 months, I was on my way back to Medan once again – this time, loaded with presents, books, stationary, and bursting with excitement. 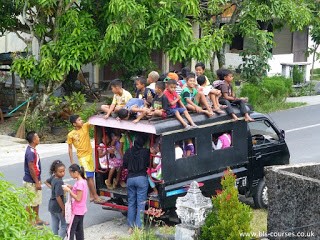 The school is mostly run by local people, who cook and clean for the teachers, help with lessons, and also employ volunteers from the UK and Europe, who teach English to the children, ranging from 3 to 14 years, as well as to adults in the villages around Bukit Lawang on various levels. Children go there for free after their usual school, either on foot or by taxis, which are organised for them by the school. Older children come with their younger siblings, sometimes as young as 1.5 years old, and some are even eager enough to come every day. They are excited and often wait outside the school gates up to an hour before the lesson starts. When the time comes, they are then led to their classrooms, and sometimes, when numbers are high, they are split into several classes, often occupying the roof terrace, lying on mats laid out for them. When I was teaching with a girl from Australia, we covered topics such as ‘Underwater world’, ‘Opposites’, ‘Activities’, ‘Family’, ‘My Body’ and ‘Protect the jungle’. We have found that a combination of activities such as word searches or puzzles, and active games worked very well, and targeted all ages in the class (which sometimes varied considerably). We spent a lot of time on preparing handouts, so that children could collect these in their booklet, as we didn’t have an official syllabus to follow. I was also amazed by the sheer and clear talent the children displayed – one group of boys was really clever in organising themselves and thinking strategically, one girl was brilliant in drawing, even things she has never seen before, and some were just great in helping other children, or enjoyed helping teachers in a more responsible role. 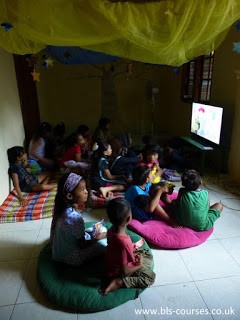 In addition to the school children, the teachers also help out in the kindergarten. Children, as young as 1.5 years old, learn in a playful way to say and read their first English words, often through games, arts and crafts and songs. During my time there, we were teaching about the body, day and night, colours and jungle or farm animals. Children loved to sing the ‘Old McDonald had a farm’ song and a jungle song which the local trekking guides sang about orangutans. We have also introduced a daily greeting schedule, which consisted of greetings for different times of day and corresponding activities such as ‘eating’, ‘sleeping’, ‘playing’ etc. . Repetition, especially combined with fun, was a huge success with the little ones and you could often hear them singing or reciting the learned material after class!

The school also runs adult classes in the evening for local jungle guides, as well as local people working in bars and restaurants, who want to communicate better with tourists. I have taken a step further, and started taking English material with me when going out in the evening, often teaching several people working in the restaurant on various levels – from kitchen staff to managers. I covered aspects such as simple tense, greetings, weather and opposites, worked with pop songs and crossword riddles, and introduced as much free conversation as possible. Even in my last two weeks in Bukit Lawang, during which I was on holiday, I was asked for lessons by the restaurant staff. 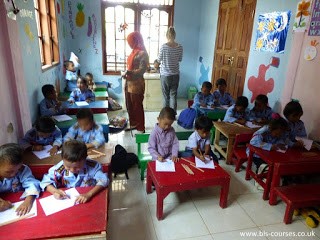 Overall, my teaching experience was an unforgettable time, filled with wonderful children and local people, the amazing foods from the local market, interaction with local staff and parents, as well as the success of setting up a movie room and a movie night, as the nearest cinema was 2 hours’ drive away. But most importantly, it was a huge learning curve for me – seeing the joy and eagerness for learning in the children’s eyes, appreciating their talents and characters, and being a part of their lives, even if for a very short while.