Wings of desire (Der Himmel über Berlin) is the only film I have seen more than once and it is definitely my favourite. It was directed by Wim Wenders in 1987 and awarded at the Cannes Film Festival. 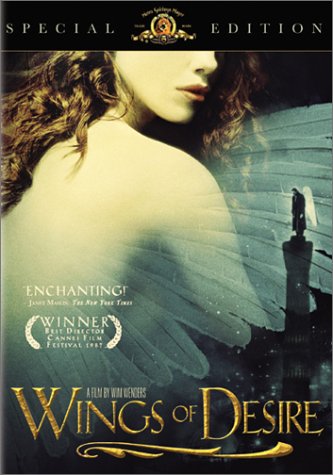 There are several reasons which make the film so special and lyrical. First of all, it is the romantic fantasy plot. The film tells the story of two angels, Damiel and Cassiel, who observe West Berlin’s life and listen to people’s thoughts while remaining invisible. The angels are immortal observers and can’t interact with people and their world. It changes when Damiel falls in love with Marion, a trapeze artist and decides to become human. With this decision the black and white film becomes colourful and Damiel is able to experience human sensory pleasures, such as food and the touch of his beloved woman.

One of my favourite scenes takes place in a library, where several angels sit by the readers while they immerse themselves in literature. There is an old man among them, named Homer, who dreams of an epic of peace. He expresses his disappointment that peace doesn’t inspire poets as much as war. His thoughts are illustrated with the real images of a ruined city and the victims of war.

The film not only praises peace but also music. Damiel meets Marion on the Nick Cave and the Bad Seeds concert. It is the beginning of their relationship. Music is shown as one of the greatest human pleasures with a power to bring people together.

It is also the poetic language of the inner monologues that makes the film so special. One can find inspirations of Rainer Maria Rilke’s poetry. Wings of desire begins with the poem Song of Child written by Peter Handke, who also wrote much of the dialogue and poetic narrations. One of the most significant monologues are Damiel’s plans for the first day after his metamorphosis, which expresses his passion for life: First, I’ll have a bath. Then I’ll be shaved by a Turkish barber who will massage me down to the fingertips. Then I’ll buy a newspaper and read it from headlines to horoscope. On the first day, I’ll be waited upon… For requests, ask the neighbour. If someone stumbles over my legs, he’ll have to apologize. I’ll be pushed around, and I’ll push back. In the crowded bar, the bartender will find me a table. A service car will stop, and the mayor will take me aboard. I’ll be known to everyone, and suspect to no one. I won’t say a word, and will understand every language. That will be my first day.

Wings of desire encourages the viewer to appreciate every simple moment of life. It also gives them a feeling that people and animals are not the only inhabitants of the Earth. The film was an inspiration for the City of angels with Nicolas Cage and Meg Ryan and it is also an inspiration for everyone who has watched it.
Quotations;